Dannebrog – The Flag That Fell from the Sky: The Golden Age of Danish Art

For Estonia, the Battle of Lyndanisse, which occurred in 1219, meant that Tallinn was mentioned for the first time in written sources and, for Denmark, it marks the wondrous and legendary moment of the birth of the Dannebrog: the national flag. The celebration of the 800th anniversary of this event marks the first time that such a comprehensive exhibition of the Golden Age of Danish Art from the National Gallery of Denmark is being organised in Estonia.

In Denmark at the turn of the 20th century, art from the first half of the 19th century started to be called Golden Age Art, because, despite the unrest caused in the country by military defeats, slave uprisings, devastating economic decline, and loss of territories, a powerful process of national self-determination occurred, in which art played an extremely important role. The goal of the exhibition is to provide a critical and selective survey of the developments that occurred at a time when art and politics blended together as the road to nationalism was being established. The role of art as the influencer and reflector of the people’s consciousness makes these themes not only interesting and educational for the modern viewer, but also topical and thought-provoking. 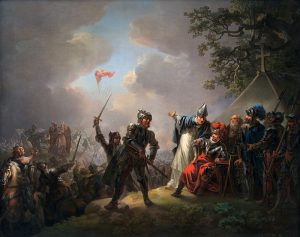 Christian August Lorentzen. The Legend of the Danish Flag. The Dannebrog Falling from the Heavens during the Battle of Lyndanise in Estonia in 1219. 1809. National Gallery of Denmark

The exhibition starts off at the end of the 18th century in order to include some of the decisive trends in the arts and in politics that lay the foundations for the creation of a new, liberal and national self-understanding. In Danish art history, two professor-colleagues at the Academy of Fine Arts in Copenhagen, Nicolai Abildgaard (1743–1809) and Christian August Lorentzen (1746–1828), are not regarded as belonging to the Golden Age, although as teachers they were relevant to its development. It is Christian August Lorentzen who created the famous painting of the Dannebrog’s miraculous fall from the sky at Tallinn. The axis of the exhibition is based on the complexity of creating the national identity: both honourable and contradictory. The following generation, led by the “father of Danish painting”, Christoffer Wilhelm Eckersberg (1783–1853), with his important students and colleagues, such as Christen Købke (1810–1848), Christen Dalsgaard (1824–1907), Peter Christian Skovgaard (1817–1875) and Johan Thomas Lundbye (1818–1848), managed to define Danishness anew through their art.

Christen Schiellerup Købke (1810–1848). The Northern Drawbridge to the Citadel in Copenhagen. Ca 1837. Oil on paper, set on canvas. National Gallery of Denmark

The paintings created by the masters of the Danish Golden Age became embedded as significant focal points – local nature, people and “places of memory” – in the people’s self-awareness. The new landscape paintings were targeted at a bourgeois audience that was rapidly acquiring economic, political and intellectual power, as they moved in ever larger numbers to the cities, and away from the countryside depicted in the paintings.

In a landscape painting, a whole new world-view could be hiding in plain sight, where it was natural for a human to be in tune with nature, gay and free, as opposed to being ruled by others. Even trees could acquire deep meaning in Danish landscapes, and often beech trees were symbols of the new nation and the oak tree of the old kingdom. Light – especially bright, crystal clear and creating a festive feeling – became one of the most Danish of elements in the depiction of the people’s life and the landscape. 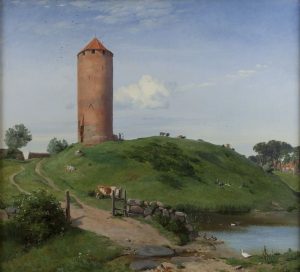 Certain buildings and locations in the landscapes, which were reminders of key events in Danish history, famous rulers or military successes, became influential shapers of the national identity and expressions of the mood. One such symbolic building was the Goose Tower (Gåsetårnet), Denmark’s only totally preserved fortified tower from the Middle Ages. By commissioning paintings of historically meaningful places, citizens took control of the nation, displaying national symbols – the king and the church – in their private homes in monumental forms. Royal prerogatives were shaken. The castles were becoming national memorials.

Christoffer Wilhelm Eckersberg (1749–1828)
Christian VIII Aboard his Steamship Ægir Watching the Manoeuvres of a Squadron near Copenhagen. 1844. Oil on canvas. National Gallery of Denmark

Maritime activity has been a hallmark of the Danish character since the Viking Age. And this was no less true in the colonial era, when trading routes had to be protected against pirates and foreign countries. Therefore, the loss of the fleet in 1801 cannot be underestimated, nor can the significance of Christoffer Wilhelm Eckersberg’s maritime works, which show the busy naval activity of the day. If there is a specific Danish setting which is also common to all the countries of the Baltic Sea and the North Atlantic, it may not be the castles or the meadows of northern Zealand, but rather the sea, which defines each nation and binds them together.

The guidelines established by Niels Laurits Høyen, the influential art historian and critic, called for artists to produce art that expressed the soul of the Danish people by focusing on the history of the people and its glorification and expressing the spirit of the Danish nation through the depiction of the local landscape and rural life. Based on these ideas, many masters of the Golden Age included scenes ranging from the everyday life of rural people to national days of celebration as their subjects. While today’s viewer might view these scenes of everyday life as clichés, at the time works of art raised these everyday motifs to a patriotic and national level. In the artworks of Jørgen Valentin Sonne and Christen Dalsgaard, small everyday events become eloquent expressions of the national mentality of the era.